A Local Solution for Concussion ‘Epidemic’: Prevacus Could be a Football Sideline Staple

Where the story ends is uncertain because nobody has all the answers concerning the long-term effects of concussions.

However, the potentially groundbreaking drug could help change that.

Prevacus is being developed by Jake VanLandingham, a neuroscientist and a former member of the FSU Medical School.

“I think you can reduce the development of long-term effects by 80 percent if you can treat a concussion for the first 14 days,” said VanLandingham, 44, who played football and basketball at Florida High.

“I believe we can get our youth back on the field and in the classroom much quicker by treating their concussion with our drug. The drug will prevent post-concussion syndrome and hopefully reduce the incidents of post-traumatic stress disorder.” 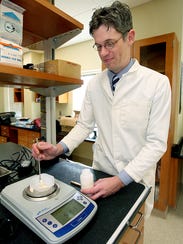 Currently, there are no drugs available for concussion treatment – just rehabilitation, rest and some luck since brain trauma can impact people differently.

Prevacus is intended to be administered nasally (in a powder form) within minutes after diagnosis of a brain injury. It is designed to treat concussions at the molecular level to trigger the reduction of inflammation, swelling and oxidative stress.

VanLandingham hopes Prevacus is on the market in three to four years. He said his company has received substantial funding, in the millions, from local and national sources.

High-profile athletes such as Hall of Fame quarterback Brett Favre are involved and understand firsthand the urgency around brain injuries in football.

Favre suffered a concussion on the last play of his 20-year NFL career in 2010.

The 48-year-old is deeply concerned about irreversible brain damage brought on by years of vicious sacks and hits.

Former Green Bay Packers Brett Favre shows off his Pro Football Hall of Fame ring after receiving it during halftime of the game against the Dallas Cowboys at Lambeau Field. (Photo: Jim Matthews/USA TODAY Sports)

“One of the first questions I asked Jake when we met four years ago was: ‘Is this a product that can help me?’ ” Favre said in a telephone interview with the Tallahassee Democrat.

“Unfortunately, it won’t. But something has to be done in the concussion world and not just obviously with football, which is where the most attention is focused. To have a product on the playground, on the sidelines, in a gym, and in a household that could stop brain swelling in its tracks is nothing short of amazing.

Favre is trying to help make that happen.

He’s invested in — and is raising money — for Prevacus and recruiting other NFL greats and dignitaries to join the company’s sports advisory board.

While there are ways to reduce the chances of sustaining a concussion in athletics, especially with improvements in equipment, concussions are a fact of life. Concussions are particularly common among athletes who play a contact sport, and most people usually recover fully after a concussion.

Still, experts don’t exactly know what a concussion is — though everyone agrees it can impact lives. 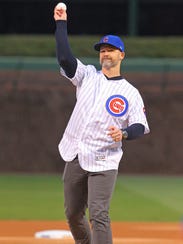 Ross, who suffered at least five concussions during his 15-year Big League career, recently joined Prevacus’s advisory board. The Tallahassee resident is adamant about helping find a way to treat and prevent concussions.

“When you go through something like what I, and many, have gone through, without a whole lot of answers, it feels very hopeless,” Ross said.

“Talking with Jake and the group that is on board with Prevacus, I feel like this could be the start of a great breakthrough in treating concussions. I don’t want anyone going through what I went through, especially kids.

“I want the next generation to be able to play any sport they choose without the fear of damaging their brain.”

VanLandingham is unsure if he suffered a concussion as an athlete. He said players like himself at that time returned to the field when suffering “a ding” to the head during a game.

The quarterback/basketball player graduated from Florida High in 1992 and played football for one season at Valdosta State.

“He was a really good athlete, a guy who could throw it and run it,” said retired Florida High boys basketball coach Al Blizzard.

“He was a good basketball player for me, too. It’s really impressive what he’s doing.”

Neurology and physical therapy took on a personal meaning for VanLandingham at age 21. VanLandingham was knocked unconscious in an unprovoked attack outside a Gainesville restaurant, hitting his head on a street curb.

VanLandingham described the sequence of events following the assault as both a “nightmare and a miracle.”  An emergency room physician released him on the belief VanLandingham suffered a harmless fall.

The next day Vanlandingham wasn’t feeling well. His father telephoned and recognized the stress in his son’s voice. He called a friend in Gainesville and asked him to take his son back to the hospital.

Doctors later said VanLandingham was within hours of death as a result of three blood clots in the brain.

Experts agree there’s an urgent need to find a way to treat concussions immediately once diagnosed.

Leon County Schools’ student athletes are required to get concussion baseline testing as incoming freshmen before playing football. If an athlete suffers a concussion, the test is taken again and results are compared.

Two in 10 high school athletes who play contact sports — including soccer and lacrosse — will suffer a concussion this year, according to statistics compiled by the UPMC Sports Medicine Concussion Program.

“From our end, it’s really to make sure at this age with kids there’s so much development going on that we don’t make something that’s maybe a short-term issue into a long-term issue,” said Florida High football coach Jarrod Hickman.

Hickman was the ball boy at Florida High when VanLandingham played quarterback for Hickman’s dad, Mike.

“Everyone wants to go out to win and compete,” Jarrod Hickman said. “But we want and are focused on the safety of our players long-term.”

Prevacus still has hurdles to clear before it can be found on football sidelines, inside households and emergency vehicles.

Clinical trials on humans are expected to begin this spring. It also must gain FDA approval.

In the meantime, the Prevacus team is building out models for the use of this drug globally. The story that started in Tallahassee continues.

Boston Globe: The search for a pill that treats concussions

Prevasol May Have a Bold Impact on Preventing CTE

EXCLUSIVE: NFL legend Brett Favre would rather be remembered for ENDING youth tackle football than his Hall of Fame career if it means saving kids from the head traumas he endured for decades